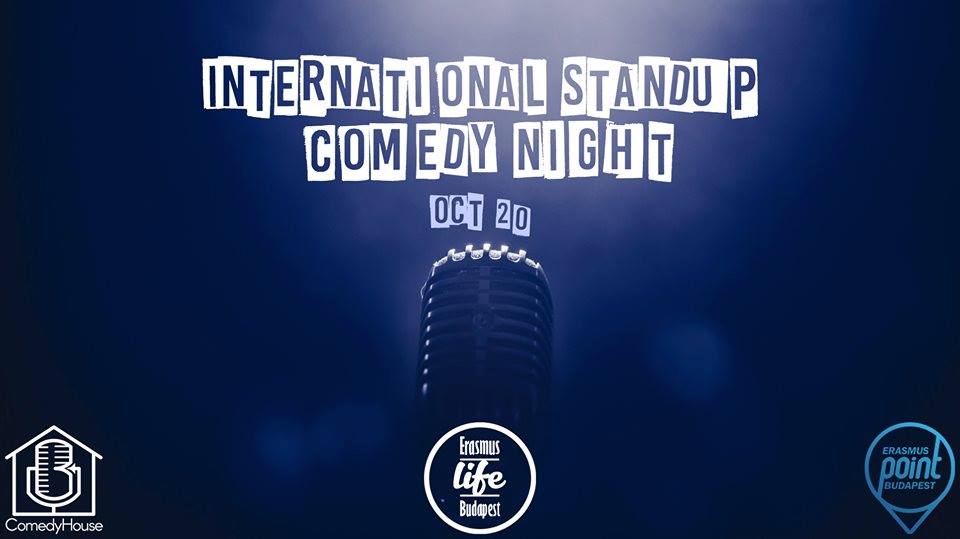 Come join us at Erasmus Point Budapest for a night of English Speaking Stand Up featuring comedians from the United States, France, Finland, Hungary and Sudan! ►

Come join us at Erasmus Point Budapest for a night of English Speaking Stand Up featuring comedians from the United States, France, Finland, Hungary and Sudan!

► Eric Gruber is an American stand up comedian and writer. He has performed at the World Famous Comedy Store in L.A, the Hollywood Improv, and every coffee shop in between. He has written for MTV, TBS, Saturday Night Live and The Howard Stern Show. He is currently living in Budapest.

► StandOut is the world’s best vertically challenged stand-up comedian. He performed in Belgium, Germany,Austria and at Sziget Festival. His hobbies are collecting tissue boxes and watching traffic lights.
He is the Co-Founder of BP ComedyHouse.

► Kitti Nagy’s edgy comedy is either nails you to the chair or makes you fall off of it. co-founder of BP ComedyHouse, the city’s most buzzing comedy club. She likes to give advice even though most of the time she needs it herself.

► Noé bex’s comedy is a mix between countryside naivety and French panache.His favorite activities are 1) watching animal videos on youtube 2) nothing else.
Come discover Noé’s fairytale about his picturesque French village St Aignan (Population 300 – of which 100 are cows).

► Rebecka is from the land of ice and mild heat. She has just moved to Budapest to represent the happiest country on earth, Finland. Finland is known for having the highest suicide rates in the world and for calling alcoholism a “cultural thing”

10% discount on all drinks with the wristband or the ELB Card!

Tickets are not available for sale any more for this event!